The Three Peaks Challenge is the most physically enduring challenge I have ever put this poor body of mine through. The emotions and exhaustion of climbing the 3 highest peaks in the UK in 24 hours is enough to make your mind boggle, but its the lack of sleep and having to drag your body out of a cramped mini bus at 4am to climb yet another mountain that personally, I found almost impossible.

But there is always one thing on your mind that seemingly will not let you give up and thats the children that our chosen charity, Julia’s House, provide care and support to. Children with life limiting conditions, children who will not live to see their 18th Birthday. It is the most painful thought and you know, however bad it gets, nothing can compare to the pain these children and their families are put through every day of their lives. 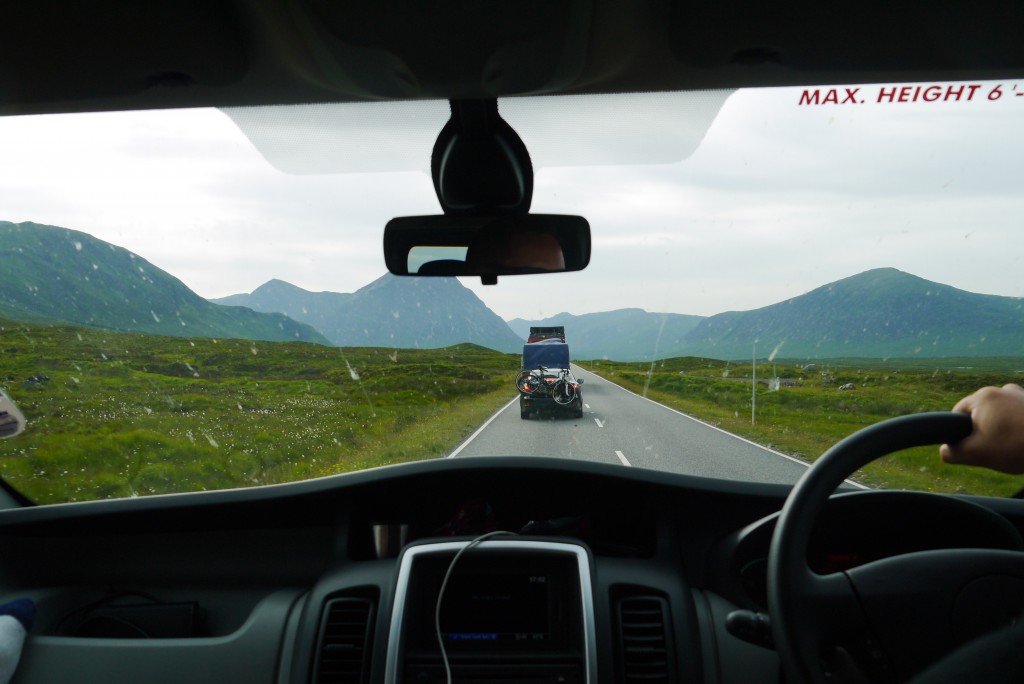 So, back to the road trip! With the plight of the children in mind, we set off from Bournemouth on our 10 hour journey to Fort William, Scotland, where we would find the highest peak of them all, Ben Nevis. 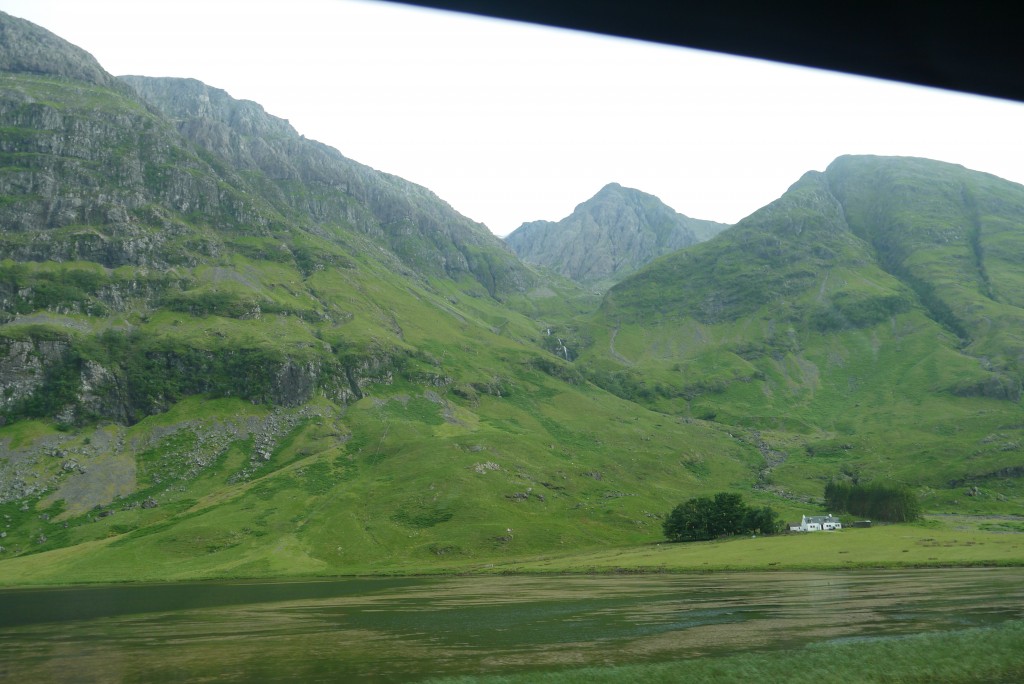 We quickly renamed our bus the “Party Bus”, plugged in the iPod and blasted out great 90’s hits as we meandered up the country. 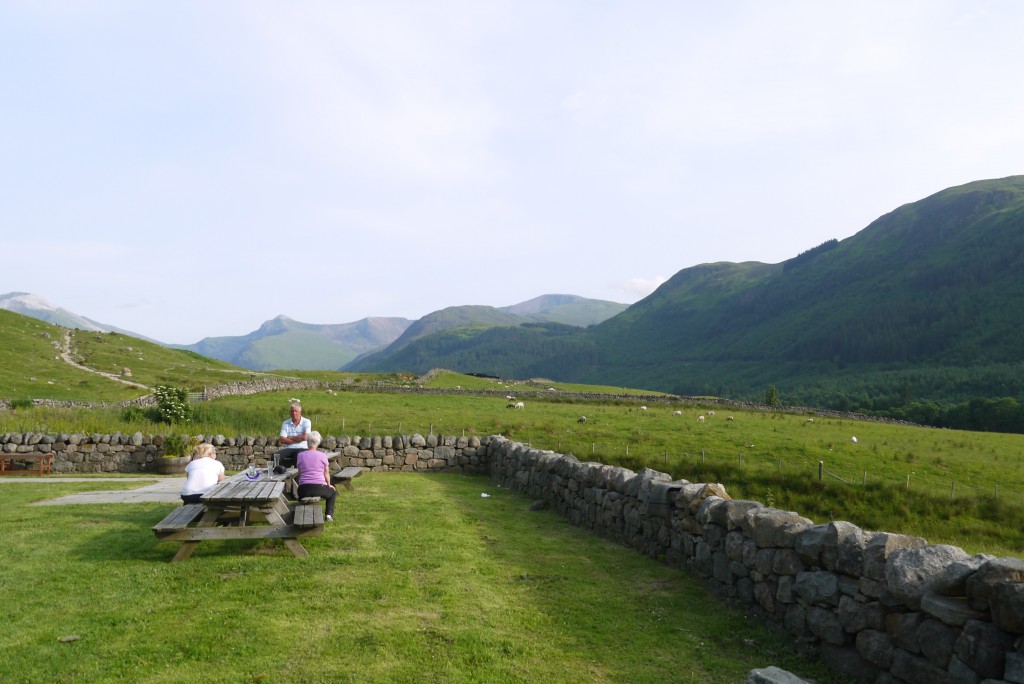 After hours and hours of amazing Scottish scenery and some very windy roads, we arrived at our destination. The girls dropped the bags off and choose their bunk for the night and the boys headed to the bar, in the shadow of Ben Nevis himself. 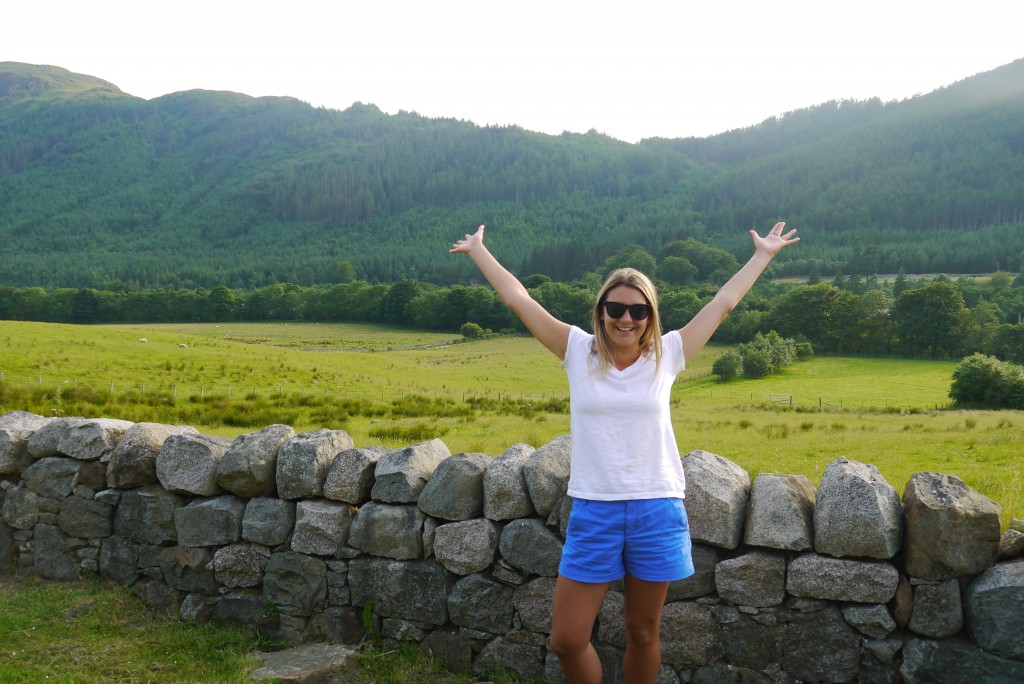 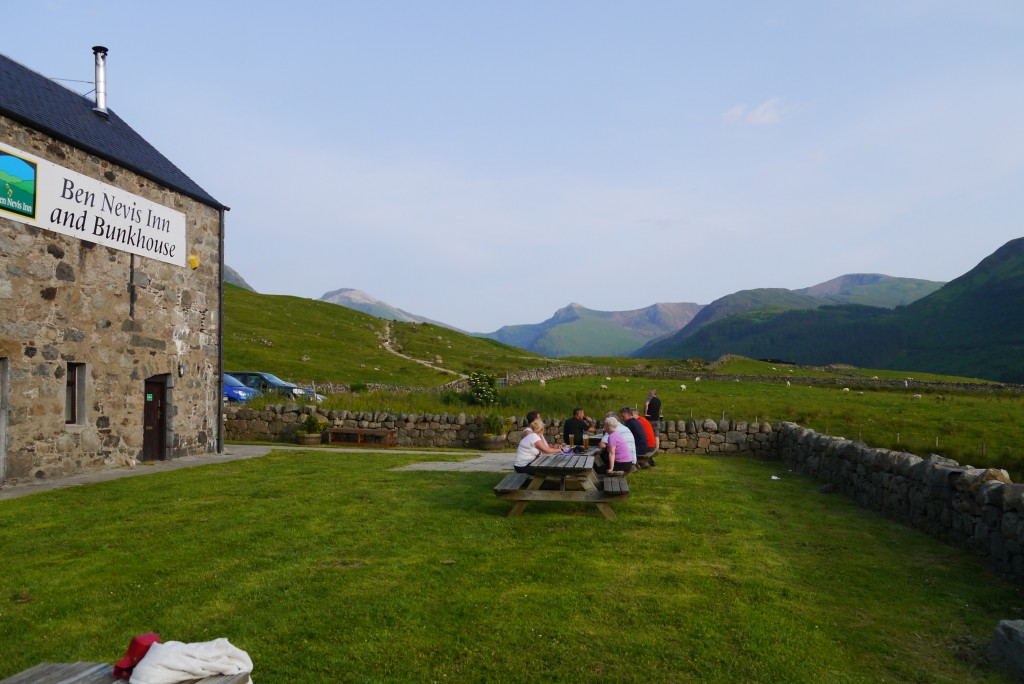 In a bid to calm the nerves, we drank the evening away, chatted with some locals and even met a group of guys who’d sailed over from Sweden. They thought we were crazy even giving one mountain a go. 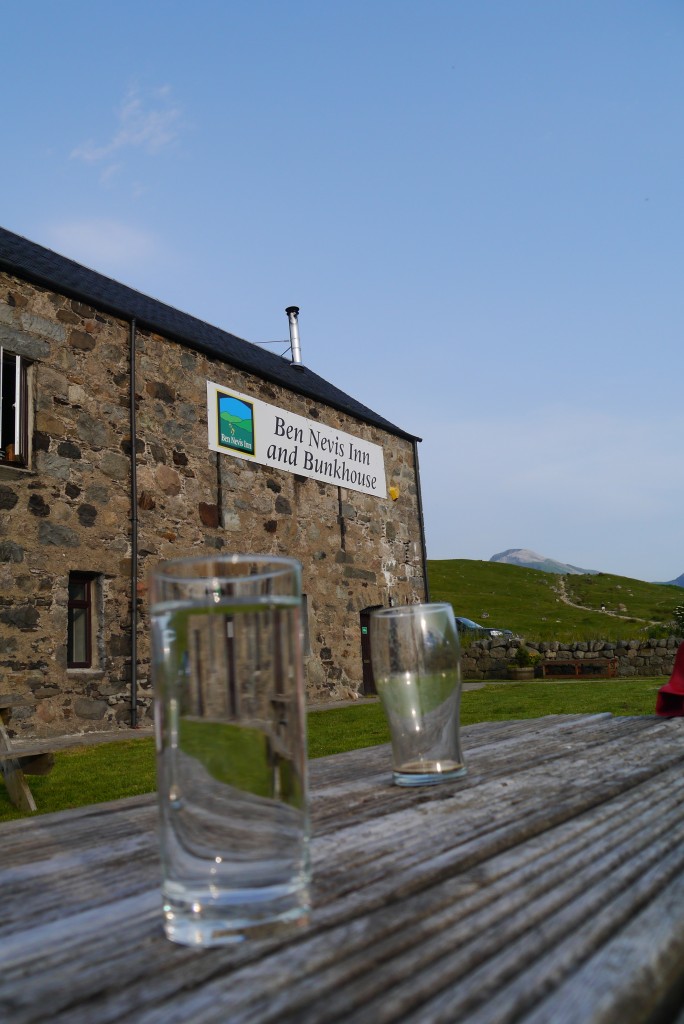 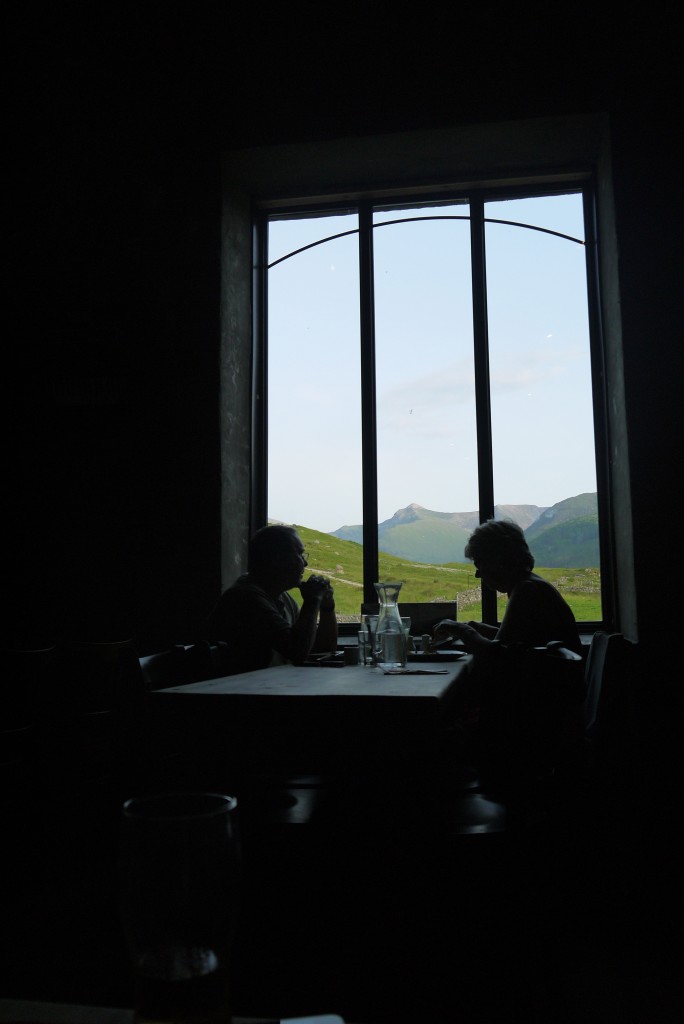 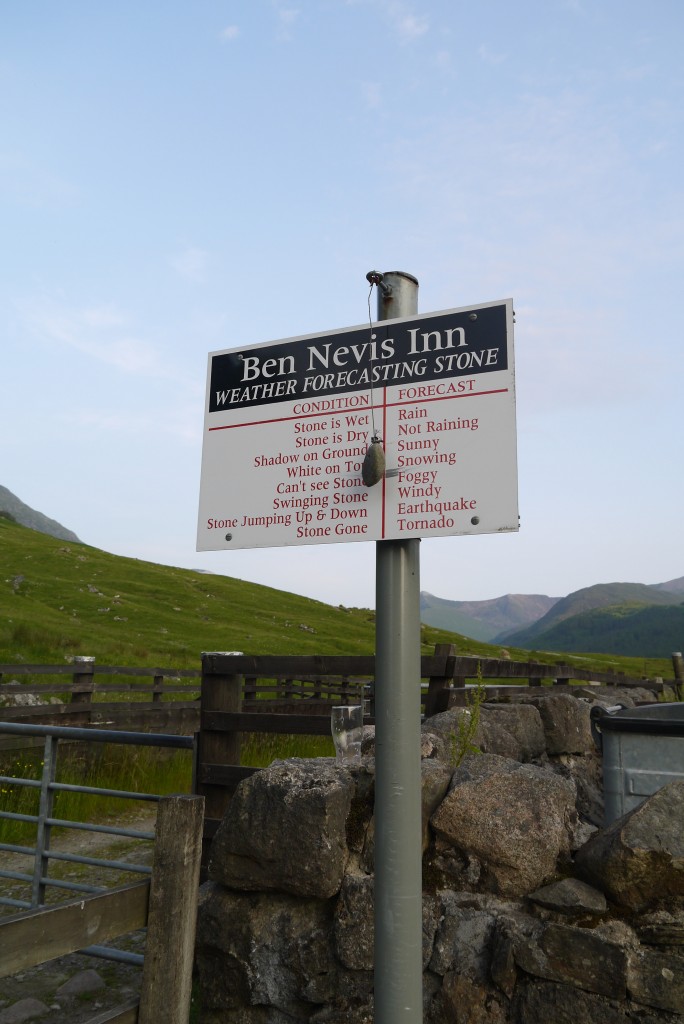 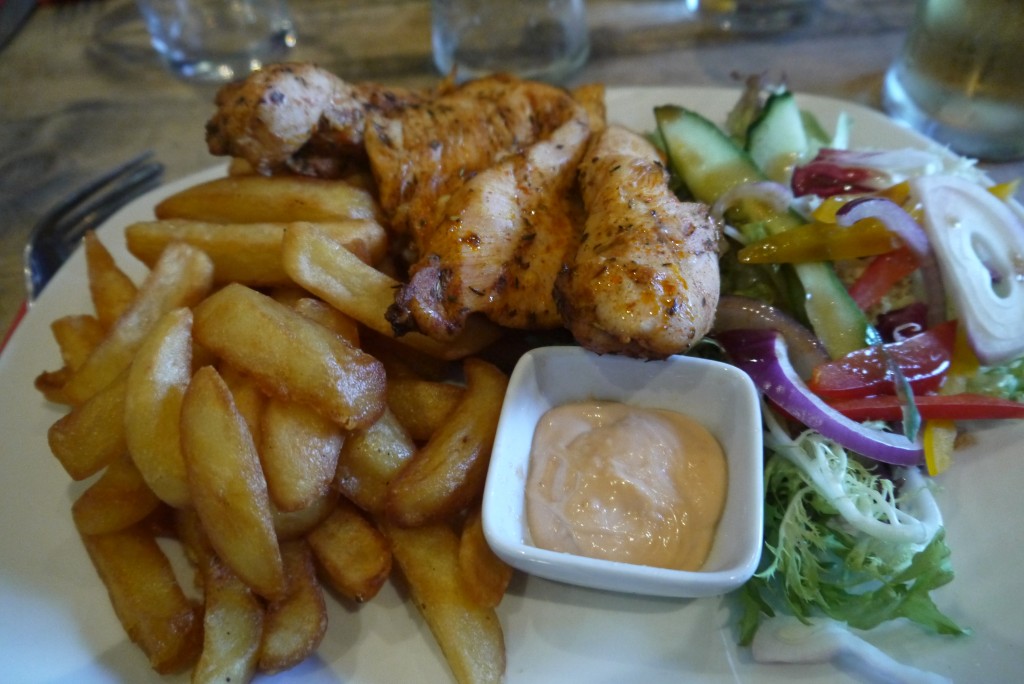 And, my, did the Ben Nevis Inn deliver! I ordered the cajun chicken and chips expecting a small portion to hostel standards. Wrong! A huge portion of handmade chips and half a chicken with a delicious spicy mayo for plenty of dunkin’. 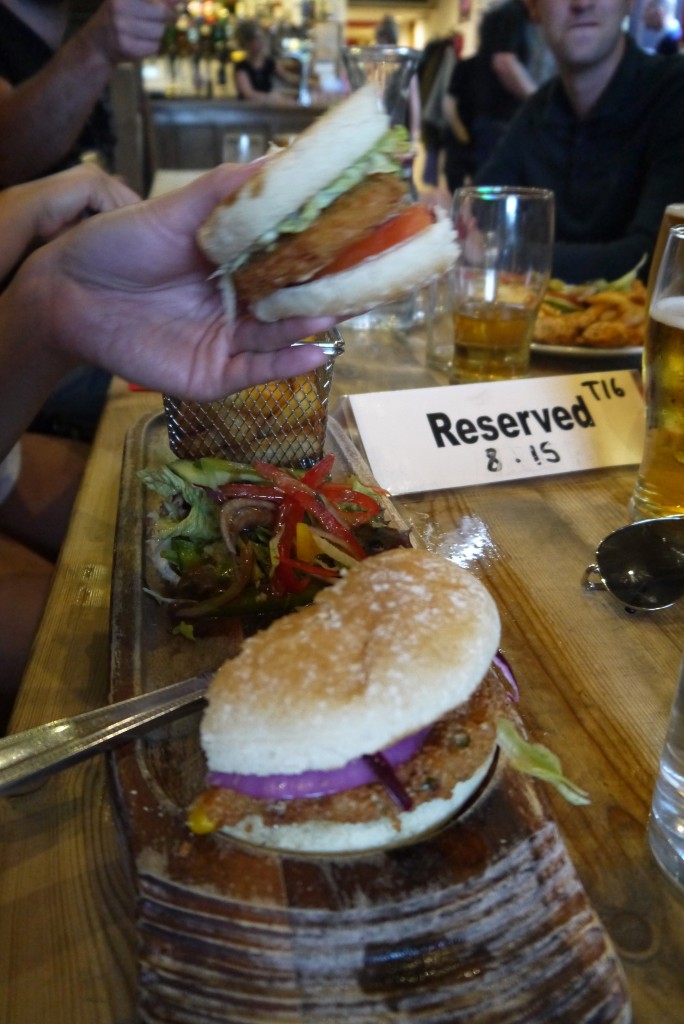 Lyn chose the Ben Nevis burger which looked incredible and judging by her reactions, was as good as it looked. As the evening went on, the only thing that was calming the nerves was the alcohol.

The next morning, waking up a little hazed, reality hit us. 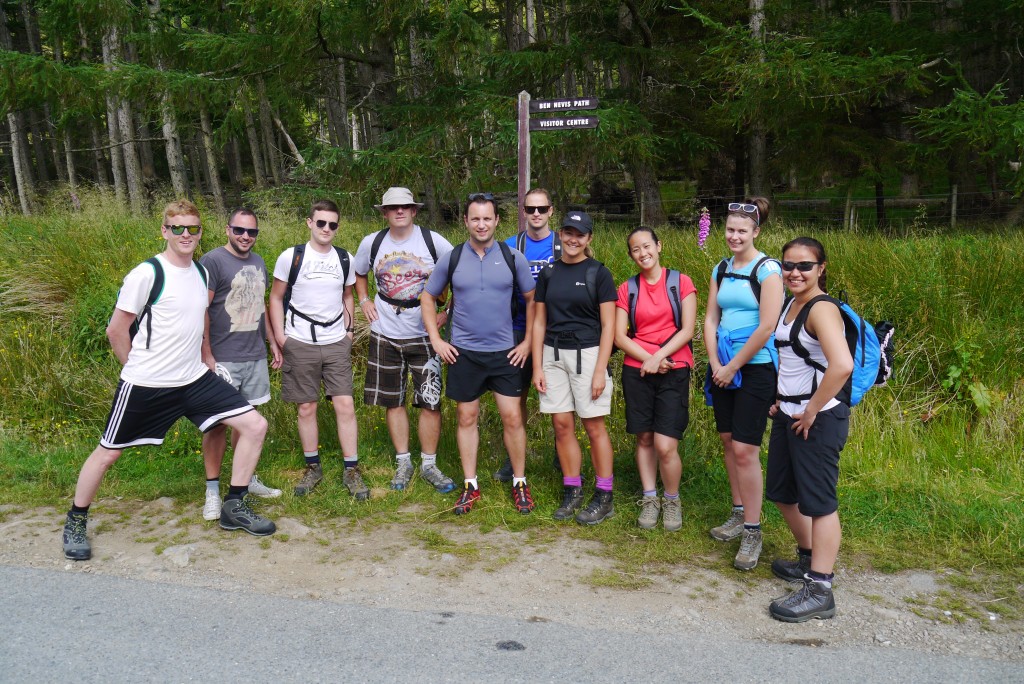 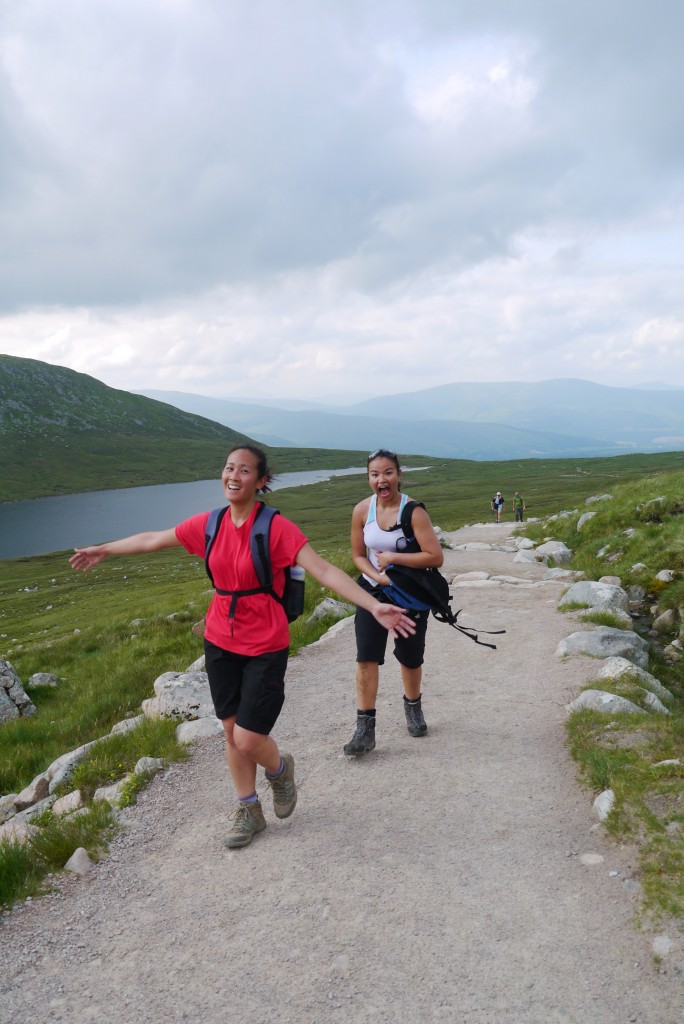 The first 30 minutes in that blistering heat will be a moment that I will never forget.

I was 30 minutes in and the shock and realisation of what was happening hit me, I’d taken off too quickly, overheated and almost fainted. Terrified for the next 4 hours ahead, I stripped off, downed as much water as I could, and  slowly set off to catch up with the rest of the team. 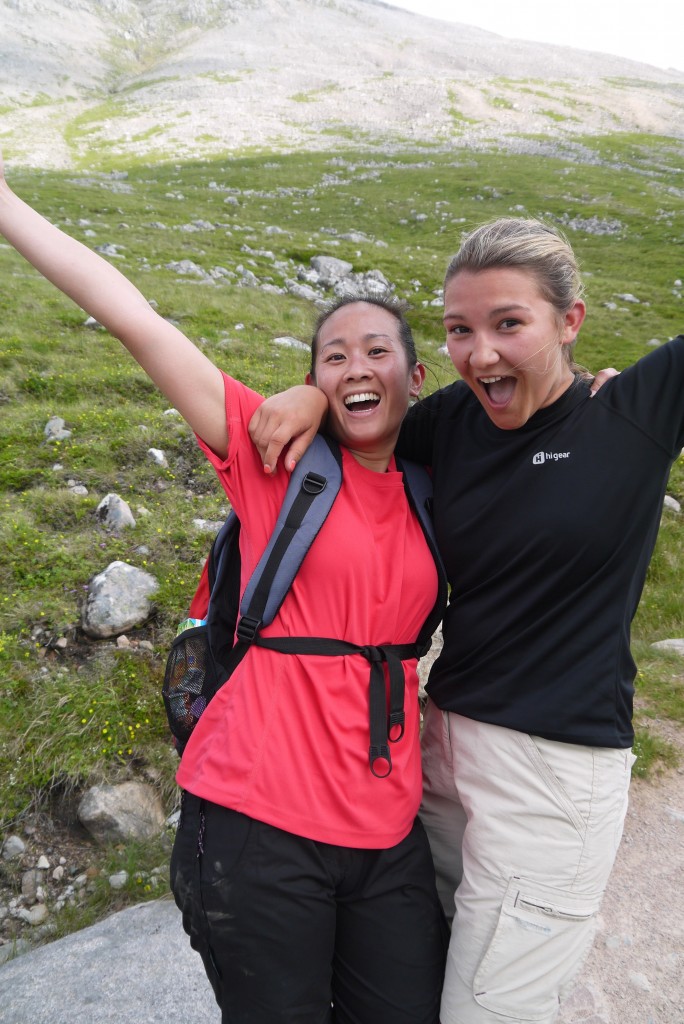 Within 15 minutes, I’d found my feet and was off. I quickly joined the leaders at the front of the group and we pursued on. 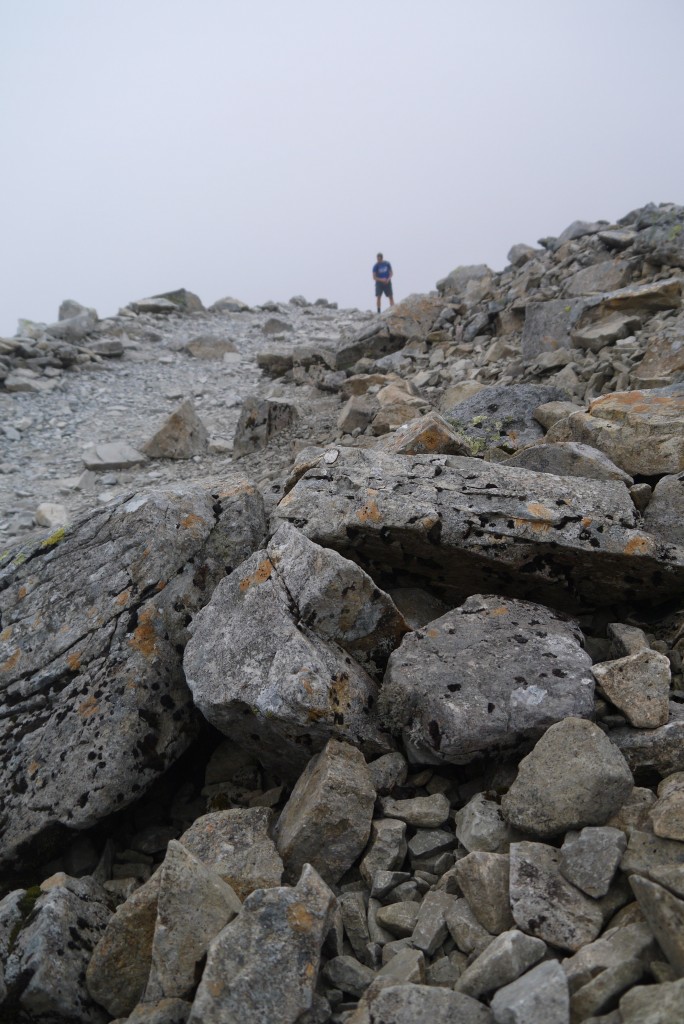 After a few hours of climbing we disappeared into the clouds. The eeriest feeling in the world, but also the most relieving, knowing the top of the relentless mountain must be approaching. 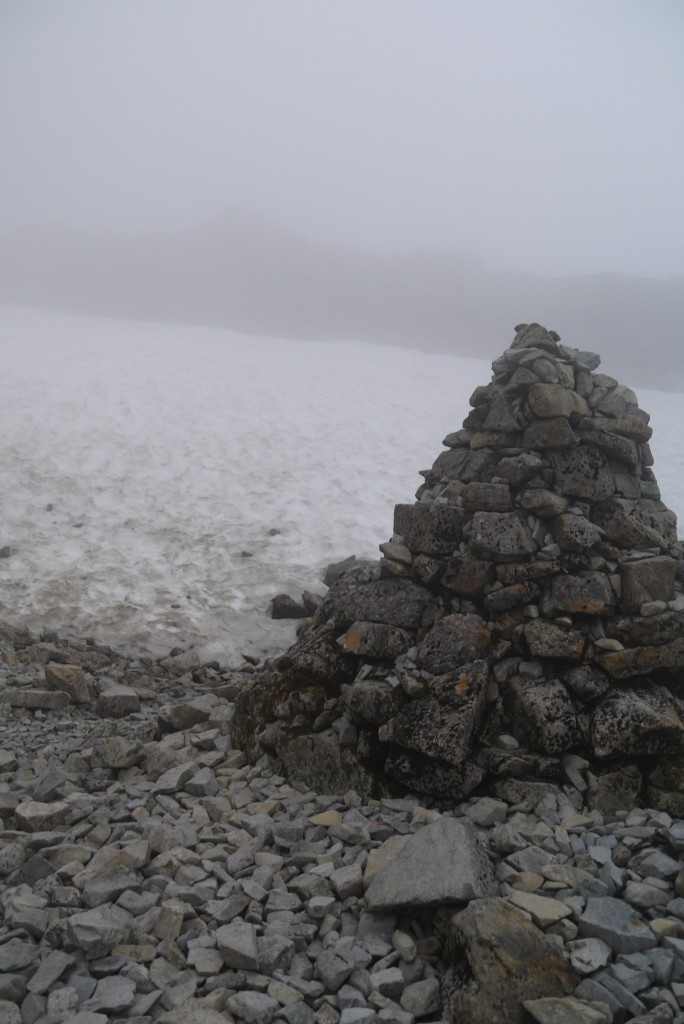 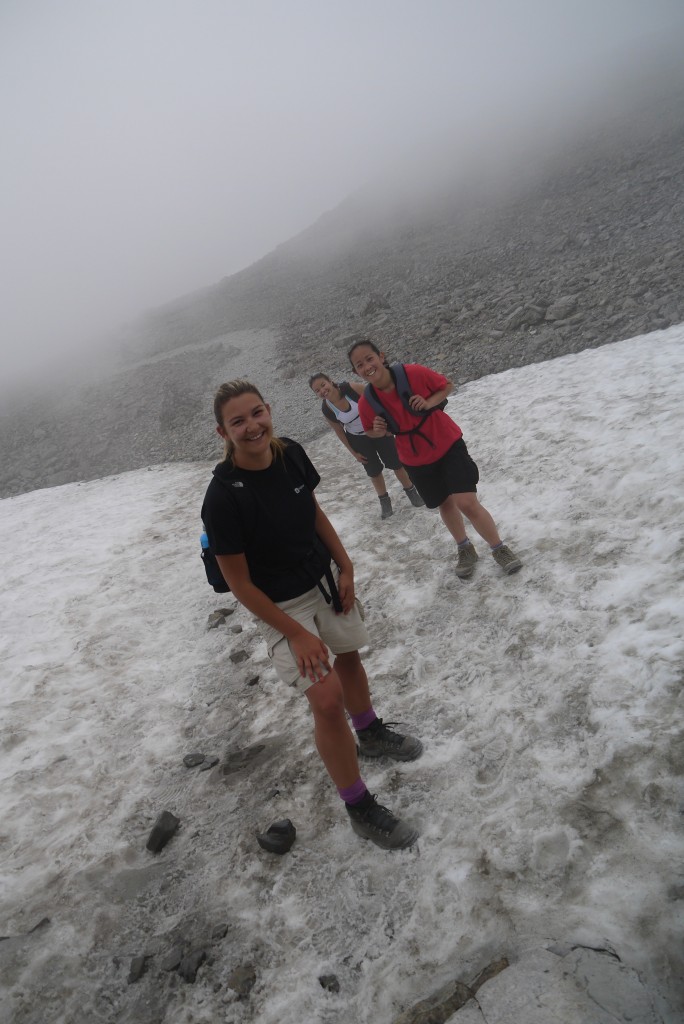 Then we hit the snow and the adrenaline started pumping at such a rate, I can barely remember the walk from here to the top. 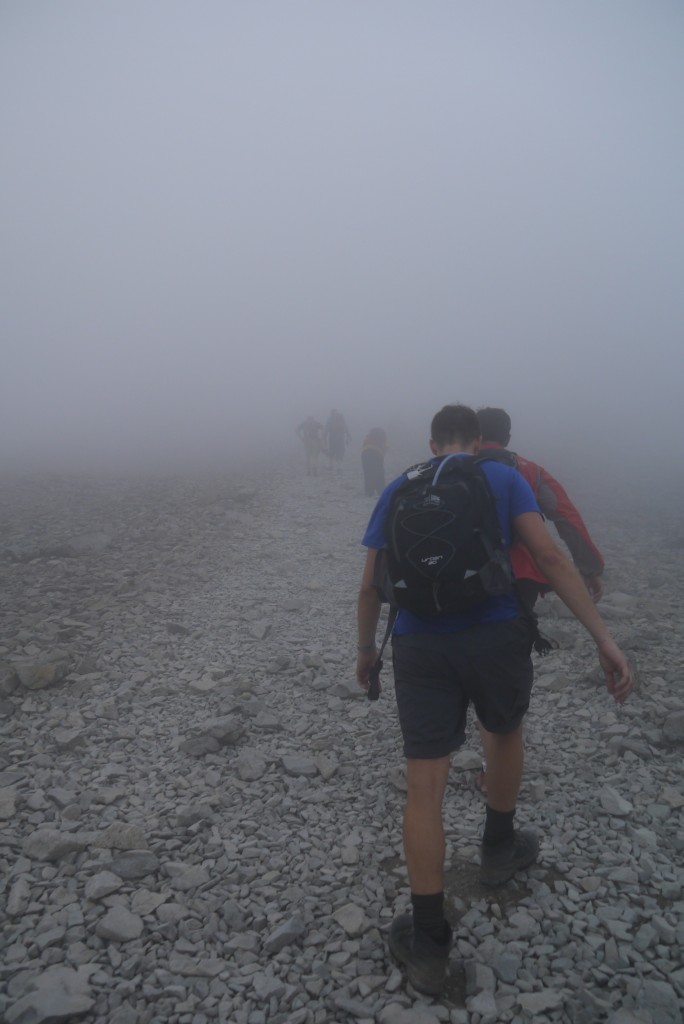 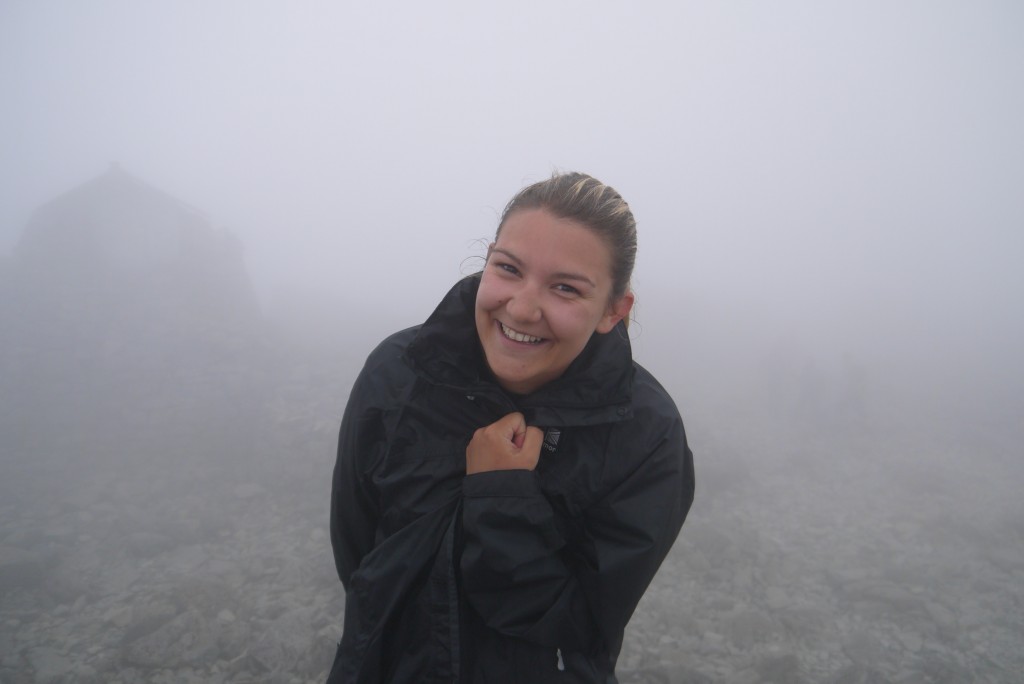 All of a sudden, the sound of voices appeared and the mountain levelled. I knew then that we’d made it. Tears of relief poured down my face as I eagerly waited for my colleagues to appear through the clouds. 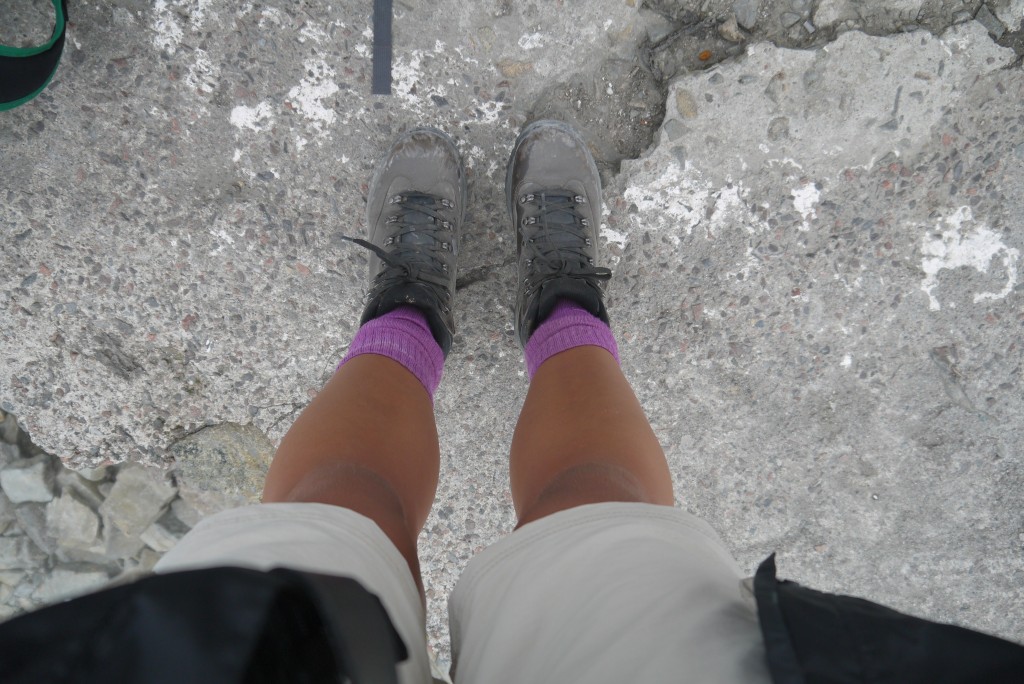 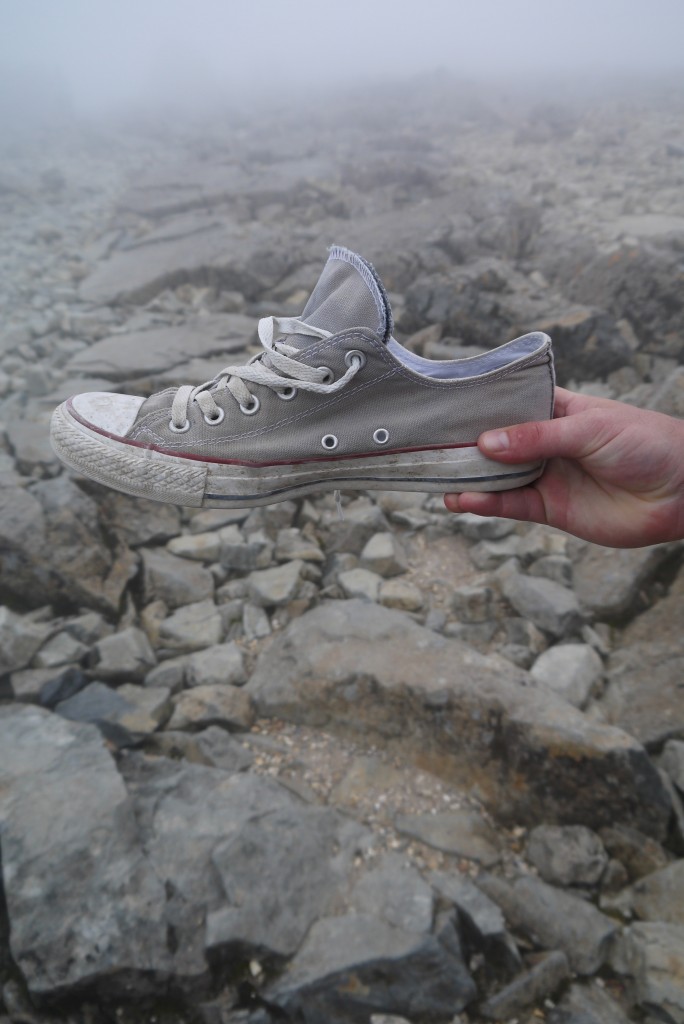 As the last person made it up, Scott appeared through the cloud (our driver for the challenge) and we realised he’d made it all the way up in his converse! He was the topic of conversation for all the climbers who were suited and booted to endurance standards! 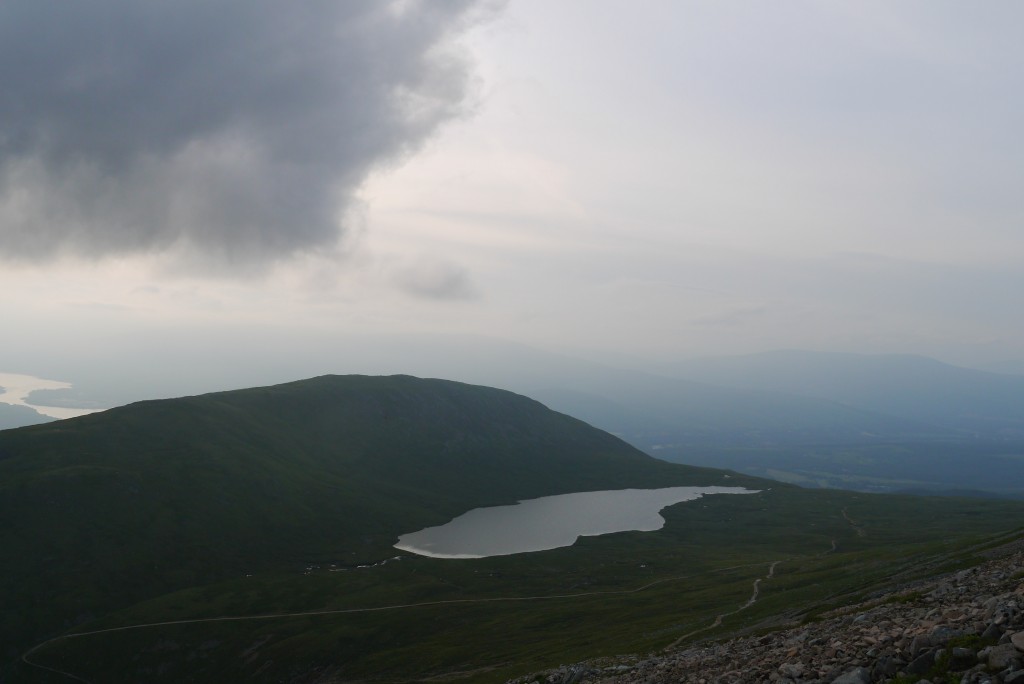 Within minutes, the fastest of the our group had started the descent at speed. I was struggling through thick cloud on my own, trying not to take my eyes off the path for a second. The outline of people teased my eyes for the next 20 minutes before the cloud thinned and the amazing view was revealed. Battling that on my own was scary, but I had to learn now that the challenge ahead was always going to be downhill for me. In parts, I was able to pick up some speed and for a good majority, I ran as fast as I could.

I completed my first mountain in 3 hours and 38 minutes.

We waited almost an hour for the last of our group to descend. When they arrived we bundled into our mini bus and took off into the night. Restless, we couldn’t sleep. The sickening feeling of the adrenaline kept our eyes open and not able to stomach eating, the hardest part was this. 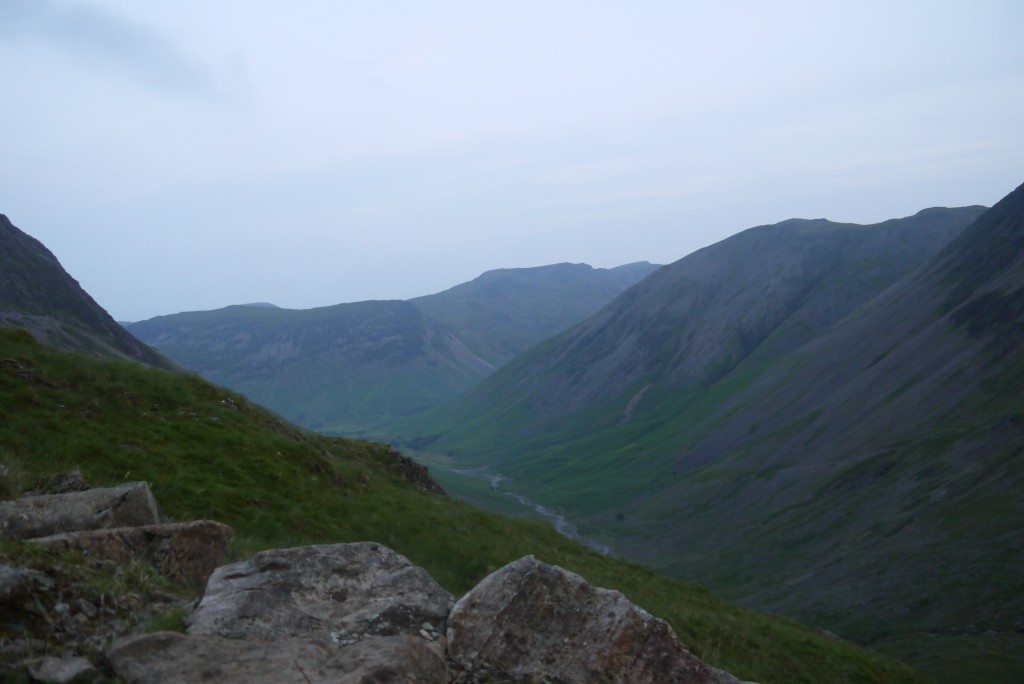 At 3.05am we arrived in the Lake District. Feeling exhausted and sick, I started lacing up my boots and tried to eat a banana. I knew I’d need all the energy I could get up this mountain. I switched on my head torch and tied my glow stick onto my backpack. Like little bugs heading into the valley, one by one we began the climb. 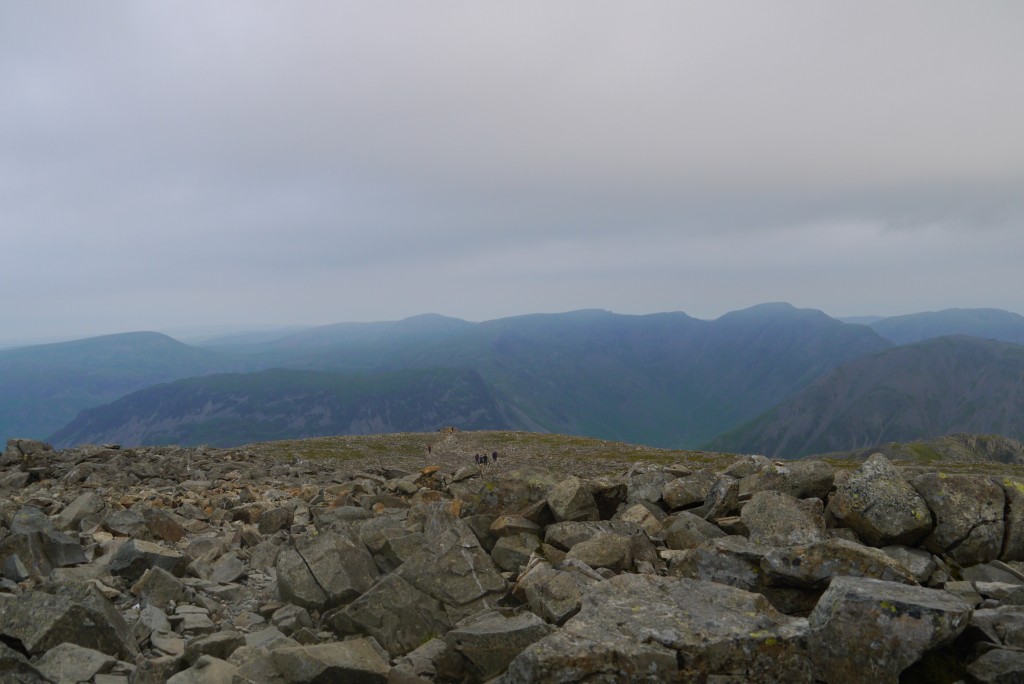 Very little could have prepared me for the relentlessness of Scaffell Pike. It is mentally one of the most unbelievably horrendous thing I have been through. After climbing sheer rock faces with our tired hands and feet for over 2 hours, we reached what we thought was the last shingled steep incline. For miles we climbed and still we could not grasp the end.

At just over 3 hours into our climb, we finally reached the top. Highly charged with emotion, I stood on top of the mountain and I cried.

Perhaps the hardest steps I have ever taken was what followed. Another 2 hours and 30 minutes of downhill descent across rock faces and uneven shingle made our quickly exhausting feet throb. The end was in sight for a good hour. We could see the farm that the vans were parked at and tears continued to stream down our faces until we were on even ground and we knew we’d made it.

There was no time for stopping. No time for more tear (or what was left). We whipped off our kit and the vans sped off towards our final mountain, Snowdon. 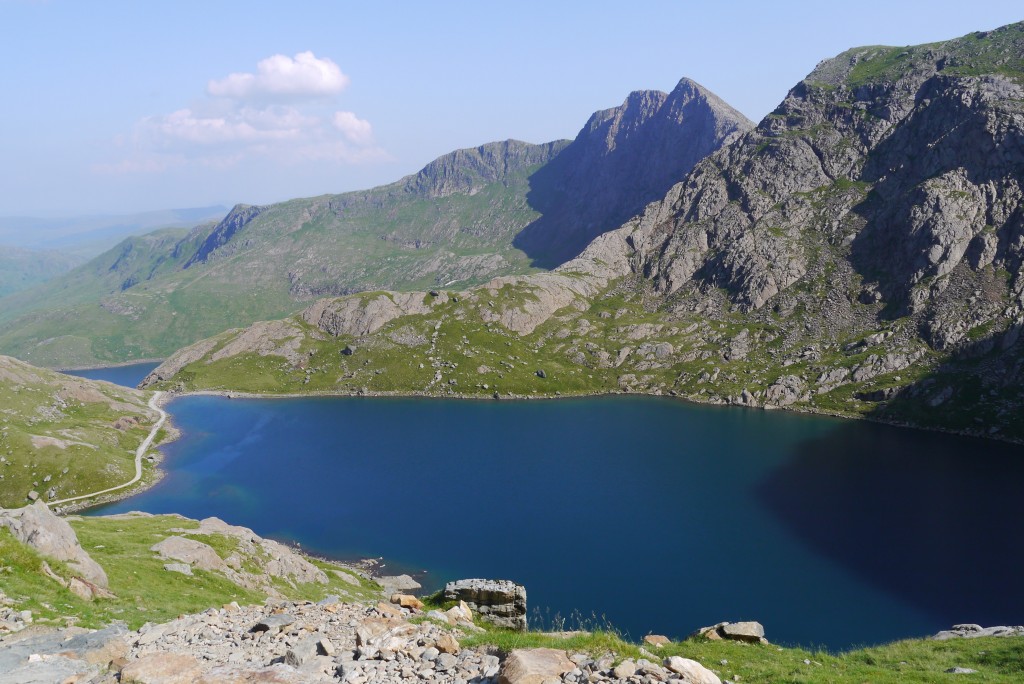 The unexpected good weather made our drive from the Lake District to North Wales long, frustrating and full of traffic jams. We could feel the 24 hour target slipping through our fingers.

As we finally pulled into the car park at the foot of Snowdon, we realised there was only 2 hours 50 minutes left on the clock. Unfortunately now virtually impossible for the girls and the weaker team members, the marathon runners took off at full sprint, determined to make the target. 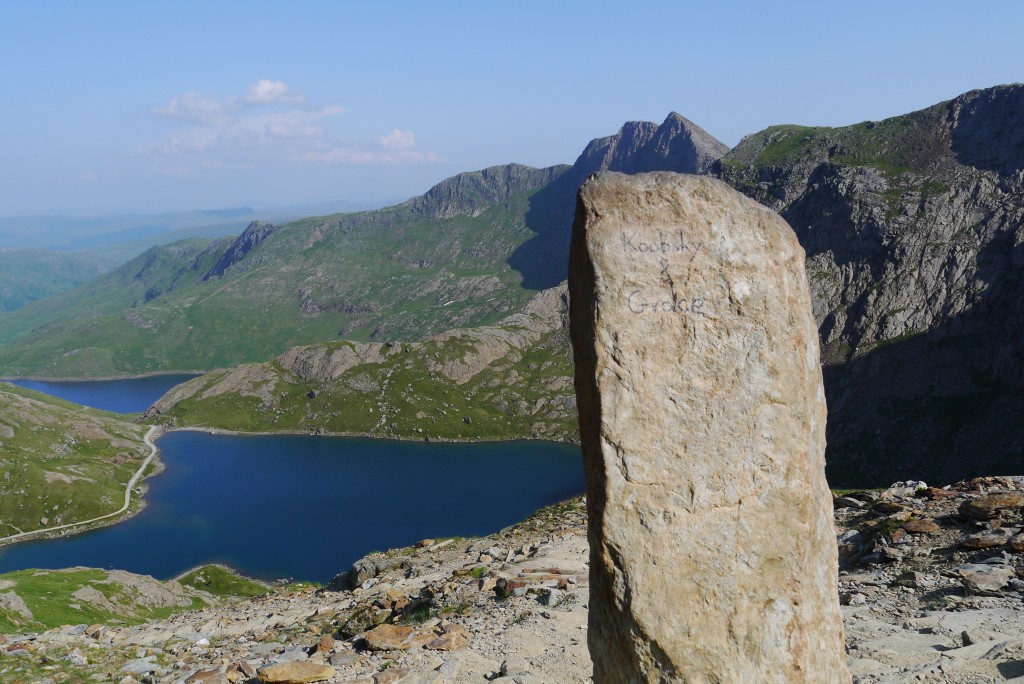 Snowdon was beautiful. Despite the 25 degree heat and the pain in our feet we carried out tired body further up the mountain. 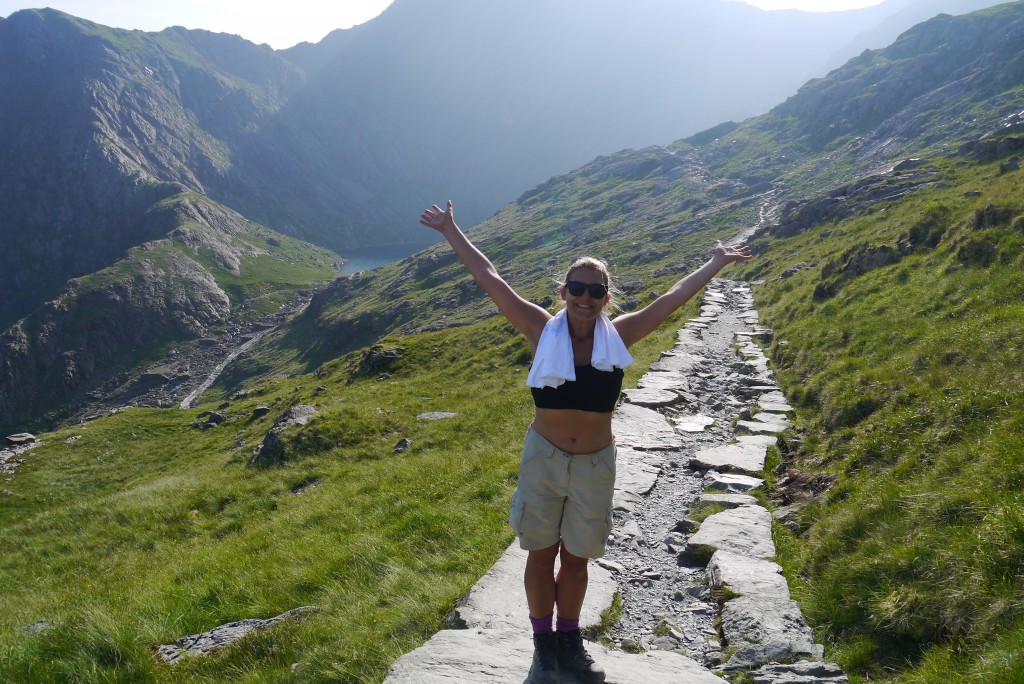 The first members of our group completed in 23 hours and 57 minutes, 3 minutes to spare. We’d done it.

The Three Peaks Challenge was an incredible experience. You learn to push your body and challenge your mind. The emotions of fear and relentlessness take hold of your body in a way that your mind starts going against everything it knows. We have raised just over £4000 for Julia’s House and our feet are just about recovered (apart from a lost toe nail!).

If your thinking about giving the challenge a go, train and eat well. Climb some mountains in advance and buy good boots. I wore these 1000 mile socks which I can thank for not having any blisters. Good Luck!

Leave a Reply to Katie Click here to cancel reply.